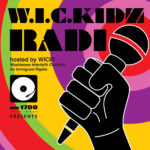 From an old converted barbershop inside the area’s largest all-nude strip club comes the twenty-sixth episode of WICKidz Radio hosted by WICIR, the Washtenaw Interfaith Coalition for Immigrant Rights.

In this month’s episode, Manny and Andres are joined in the studio by Antonio Rafael. They discuss the progress of the Trump administration’s travel ban, the Saudi Arabian-led intervention in Yemen, and the on-going Russian collusion investigation.